In this post, we provide a security analysis of Microsoft Rights Management Services (RMS) and present two working attacks:
This work is going to be presented at WOOT'16. RMSs are used to enforce access control in a distributed environment, and to cryptographically protect companies’ asset by restricting access rights, for example, to view-only, edit, print, etc., on a per-document basis. One of the most prominent RMS implementations is Microsoft RMS.
It can be found in Active Directory (AD) and Azure.

Besides others, Microsoft claims IRM to help to do the following:

RMS makes use of a very complex PKI to protect files. We do not go into details here and give only the minimum information required to understand the attacks. 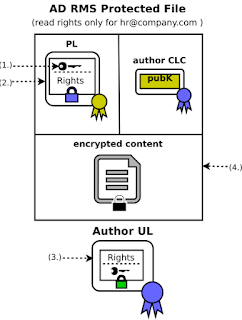 The picture above illustrates an RMS protected file. The process of protecting a Word file consists of three steps:
There are a lot of technical terms in this description. What we need to know for the following attacks is:

For those of you, who just want to have a brief overview on what we did, we summarize our attacks here. More details on Microsoft RMS and its complex workflows can be found in our research paper.

For both attacks, we assume that an attacker has access to an RMS protected Word file. We have only tested Word files, but due to the nature of the attacks, arbitrary RMS protected files should work (Excel, Powerpoint, Txt, Binary,  ...).
We further assume that the attacker has the view access right only on the file. This is the minimal right that can be granted to some user.

Suppose that the attacker is working for some company A. He has received an evaluation of some important technology. Since he is an attacker, he wants to sell this information to some other company B. This is, where RMS protection takes places: the view access is restricted to himself and he cannot send this file, for example, via Email to company B, because they don't have the view right and therefor can not get access to the file.

This is, where our first attacks takes place.


Attack 1: How to Remove RMS Protection

For the first attack, we split the protected Word document (OLE compound file) into its components (RMS License and EncryptedPackage). We created an attack tool called DisARMS (Disabling Attacks on RMS) that can be executed by every user of the domain if he has the view right. DisARMS removes the protection automatically, without any further interaction  and creates a copy of the processed RMS protected file, which contains the same content, formatting, etc, but without the RMS protection. No administrative priviledges on the client are needed for running the attack.
DisARMS executed the following steps:
Basically, this attack is not very surprising. What we generally did, is that we decrypted an encrypted file for which we know the key. This is of course nothing that Microsoft wants us to do, so we had to implement DisARMS to perform all the steps.
You might say: "Hey, why couldn't I simple to screenshots of the file or retyping the content into a newly created file?". This is something that you can obviously do, although this might either loss the formatting (screenshot case) or take a long time (typewriting). This is also declared as out-of-scope by Microsoft.
But now comes the clue: we extended the first attack to an even more severe one. The second attack makes use of the first attack and goes one step further. After removing the protection, we modify the unprotected content of the file.
We then reprotect the file, so that it looks as it would have been created by the original author of the protected file, but contains the content that we have just modified.
Suppose that an angry employee gets some information by his boss. He can then use the second attack, to modify the content, and, for example, fire someone else or pretend to receive a salary increasement.

This attack has the same requirements as the first attack.
Suppose we have removed the protection of one file. We can modify the content arbitrarily, for example, by using Word. We then use DisARMS to re-protect the document as follows:
The tampered protected document can not be distinguished from the original protected document. It will look as it would have been created by the original author and only show the correct view access right for the attacker.

This basically neglects the idea of the view-only RMS protection.

The first attack is obviously nothing new. Such kind on attacks have been shown on, for example, DRM protected eBooks.

The really worse thing is the second attack: RMS does not use any integrity protection on the content (e.g. a signature). This allows us to change the content arbitrarily.

“The type of attack you present falls in the category of policy enforcement limitations. Policy enforcement capabilities, such as the ability to prevent printing or modifying content to which the user has legitimate access, are not guaranteed by cryptography or other hard technical means“ - Microsoft Security Response Center <secure@microsoft.com>
While this is correct for the first attack, the second attack can be prevented by using digital signatures on the content. We proposed this to Microsoft. In fact, applying signatures is not as easy as one might expect due to the complex RMS PKI, but it is possible.

Our attack source code can be found at Github:
https://github.com/RUB-NDS/MS-RMS-Attacks