Printers belong arguably to the most common devices we use. They are available in every household, office, company, governmental, medical, or education institution. 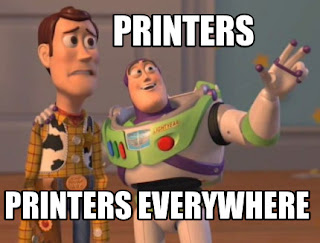 From a security point of view, these machines are quite interesting since they are located in internal networks and have direct access to sensitive information like confidential reports, contracts or patient recipes.


TL;DR: In this blog post we give an overview of attack scenarios based on network printers, and show the possibilities of an attacker who has access to a vulnerable printer. We present our evaluation of 20 different printer models and show that each of these is vulnerable to multiple attacks. We release an open-source tool that supported our analysis: PRinter Exploitation Toolkit (PRET) https://github.com/RUB-NDS/PRET
Full results are available in the master thesis of Jens Müller and our paper.
Furthermore, we have set up a wiki (http://hacking-printers.net/) to share knowledge on printer (in)security.
The highlights of the entire survey will be presented by Jens Müller for the first time at RuhrSec in Bochum.


There are many cool protocols and languages you can use to control your printer or your print jobs. We assume you have never heard of at least half of them. An overview is depicted in the following figure and described below. 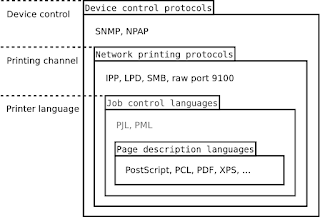 This set of languages is used to control the printer device. With a device control language it is possible to retrieve the printer name or status. One of the most common languages is the Simple Network Management Protocol (SNMP). SNMP is a UDP based protocol designed to manage various network components beyond printers as well, e.g. routers and servers.

The most common network printing protocols supported by printer devices are the Internet Printing Protocol (IPP), Line Printer Daemon (LPD), Server Message Block (SMB), and raw port 9100 printing. Each protocol has specific features like print job queue management or accounting. In our work, we used these protocols to transport malicious documents to the printers.

This is where it gets very interesting (for our attacks). A job control language manages printer settings like output trays or paper size. A de-facto standard for print job control is PJL. From a security perspective it is very useful that PJL is not limited to the current print job as some settings can be made permanent. It can further be used to change the printer’s display or read/write files on the device.

Even though printers are an important attack target, security threats and scenarios for printers are discussed in very few research papers or technical reports. Our first step was therefore to perform a comprehensive analysis of all reported and published attacks in CVEs and security blogs. We then used this summary to systematize the known issues, to develop new attacks and to find a generic approach to apply them to different printers. We estimated that the best targets are the PostScript and PJL interpreters processing the actual print jobs since they can be exploited by a remote attacker with only the ability to ‘print’ documents, independent of the printing channel supported by the device.
We put the printer attacks into four categories.

Executing a DoS attack is as simple as sending these two lines of PostScript code to the printer which lead to the execution of an infinite loop:

Resetting a printer device to factory defaults is the best method to bypass protection mechanisms. This task is trivial for an attacker with local access to the printer, since all tested devices have documented procedures to perform a cold reset by pressing certain key combinations.
However, a factory reset can be performed also by a remote attacker, for example using SNMP if the device complies with RFC1759 (Printer MIB):

Other languages like HP's PML, Kyocera's PRESCRIBE or even PostScript offer similar functionalities.

Some page description languages allow permanent modifications of themselves which leads to interesting attacks, like manipulating other users' print jobs. For example, it is possible to overlay arbitrary graphics on all further documents to be printed or even to replace text in them by redefining the ‘showpage’ and ‘show’ PostScript operators.

Printing over port 9100 provides a bidirectional channel, which can be used to leak sensitive information. For example, Brother based printers have a documented feature to read from or write to a certain NVRAM address using PJL:

Our prototype implementation simply increments this value to dump the whole NVRAM, which contains passwords for the printer itself but also for user-defined POP3/SMTP as well as for FTP and Active Directory profiles. This way an attacker can escalate her way into a network, using the printer device as a starting point.
Other attacks include:

To automate the introduced attacks, we wrote a prototype software entitled PRET. The main idea of PRET is to facilitate the communication between the end-user and the printer. Thus, by entering a UNIX-like command PRET translates it to PostScript or PJL, sends it to the printer, and evaluates the result. For example, PRET converts a UNIX command ls to the following PJL request:


It then collects the printer output and translates it to a user friendly output. 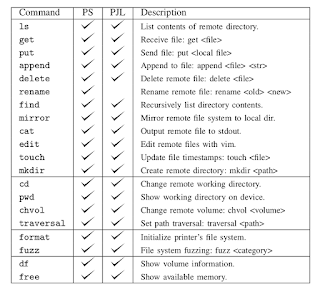 As a highly motivated security researcher with a deep understanding of systematic analysis, you would probably obtain a list of about 20 - 30 well-used printers from the most important manufacturers, and perform an extensive security analysis using these printers.
However, this was not our case. To overcome the financial obstacles, we collected printers from various university chairs and facilities. While our actual goal was to assemble a pool of printers containing at least one model for each of the top ten manufacturers, we practically took what we could get. The result is depicted in the following figure: 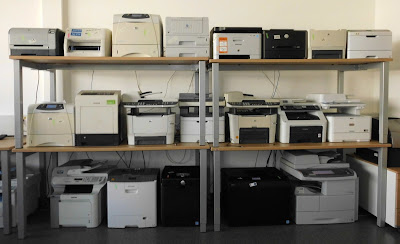 The assembled devices were not brand-new anymore and some of them were not even completely functional. Three printers had physically broken printing functionality so it was not possible to evaluate all the presented attacks. Nevertheless, these devices represent a good mix of printers used in a typical university or office environment.
Before performing the attacks, we of course installed the newest firmware on each of the devices. The results of our evaluation show that we could find multiple attacks against each printer. For example, simple DoS attacks with malicious PostScript files containing infinite loops are applicable to each printer. Only the HP LaserJet M2727nf had a watchdog mechanism and restarted itself after about ten minutes. Physical damage could be caused to about half of the tested device within 24 hours of NVRAM stressing. For a majority of devices, print jobs could be manipulated or captured. 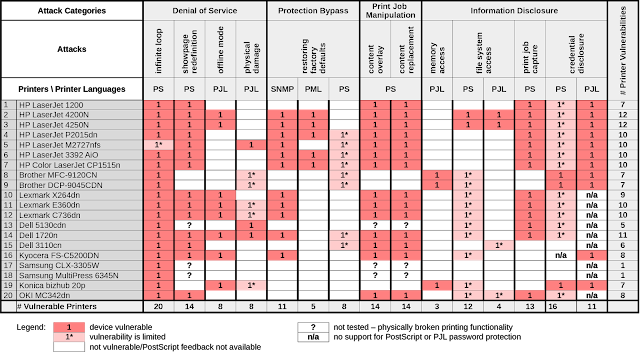 PostScript, PJL and PML based attacks can even be exploited by a web attacker using advanced cross-site printing techniques. In the scope of our research, we discovered a novel approach – ‘CORS spoofing’ – to leak information like captured print jobs from a printer device given only a victim's browser as carrier.
A proof-of-concept implementation demonstrating that advanced cross-site printing attacks are practical and a real-world threat to companies and institutions is available at http://hacking-printers.net/xsp/.

Our next post will be on adapting PostScript based attacks to websites.